HUNGRY WHALES
This article explores some of the BEST things to do in Ponta Delgada for 2019, namely places to see and activities - which we include in our tours as "top recommendations".

Ponta Delgada is the largest city and administrative capital of the Azores islands. With 500 years of history and a population of about 70.000 people, it offers a multitude of activities and places to see. Lately, it has become a very attractive tourist destination.

We made a selection of some of the best things to do in Ponta Delgada for 2019, namely landmarks and highlights, plus some great activities to do in a rainy day. Please notice this guide does NOT include bars, restaurants or commercial activities: instead, we suggest WHAT do experience. 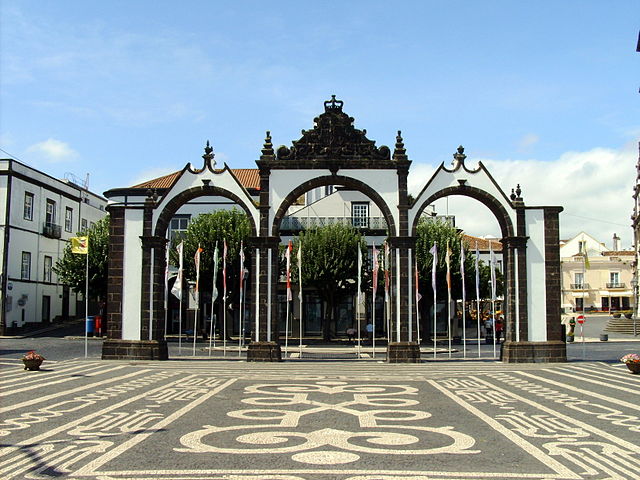 Any exploration of Ponta Delgada downtown should start at the city's main square (Gonçalho Velho Cabral square) where you'll find the iconic "city doors": a stone gate built in 1783 and comprising three arches built in the typical Azorean black basalt rock and whitewashed masonry.
Things to notice:
This monument was replicated in 2004 in Fall River (Massachusetts, USA), due to the large Azorean immigrant community settled there.

Discover some additional unnoticed and amazing artwork near this landmark by joining our Ponta Delgada Food Tour.

2. Explore the Church of St. Sebastian 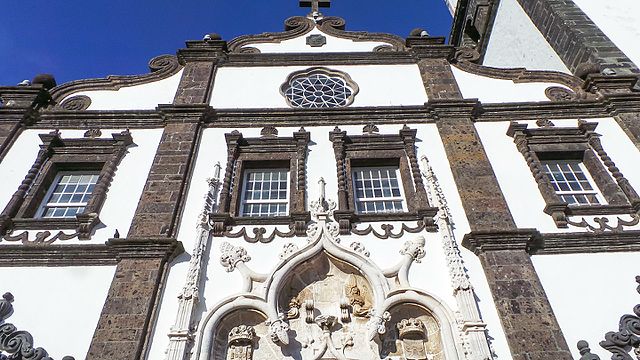 A few meters away from the "City Doors" you'll find the church of St. Sebastian (formerly called Matriz, the matrix), which was built around the 1500's, after a plague. Suffering several adaptations, it presents a mix of different architectonic styles, from Gothic to Baroque.
Worth noticing are:​
Services take place daily and the church is open to the public.
Admission: Free

Join our Private Tours to know more about the mysterious alchemical motives of the South Door. 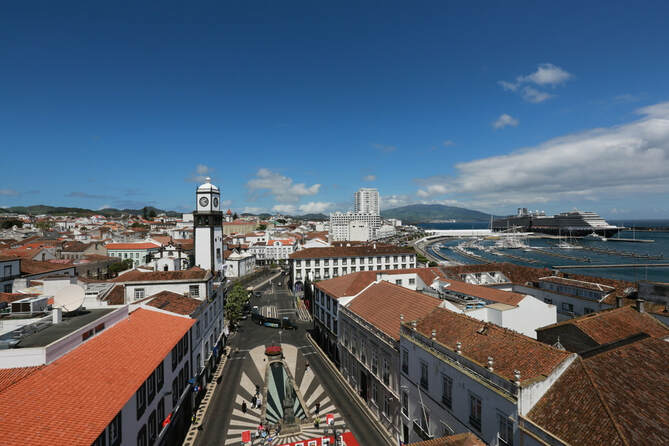 Source: CM PDL
Ponta Delgada became a city in 1546. The current town hall has a bell tower dating from 1724, which offers a great view over the city.
Some things to know:  ​
​Our tours reveal additional amazing facts about this building and its secret "white stone" 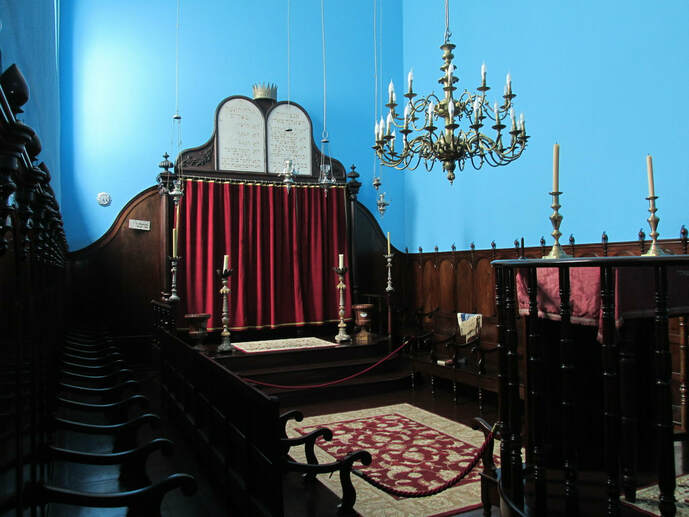 ​Learn more about the incredible discovery of the XVIII-century Torah by joining our tours. 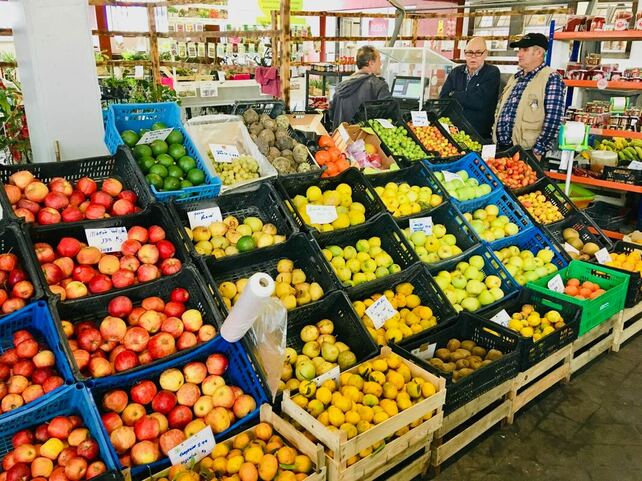 Mercado da Graça is Ponta Delgada's city market and was built in 1848, as there was need for a space dedicated to vendors and their supply animals. It's a small market where local farmers sell their produce, namely vegetables, fruits, honey, jam, etc.
Good to know:
Admission: Free
Schedules vary: from 7h30 to 18h30 on most weekdays, Saturdays until 14h and closed on Sundays.
Phone: +351 296 282 663
Adress: Rua do Mercado - Ponta Delgada

Explore the local farmers' market in our Ponta Delgada Food Tour, which includes tastings on location.

5. Relax at the City gardens and parks 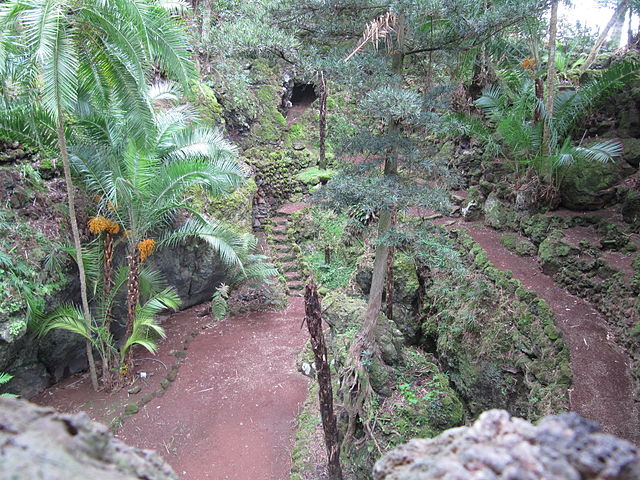 By jad99 from Graz, Austria - Jardim Antonio Borges, CC BY-SA 2.0, https://commons.wikimedia.org/w/index.php?curid=32995662
Some of the wealthy XIX-century São Miguel families invested in creating beautiful Romantic styled parks, populating them with beautiful plants and trees from allover the world. Of these, the Terra Nostra Garden (located in Furnas) is the largest and best-known example. In downtown Ponta Delgada there are a few gardens worth a visit, namely:

Jardim António Borges: This is the municipality garden and the most praised of the city park. Besides wonderful 200-year old specimens, it has a mysterious atmosphere due to its caves and tunnels, scenario of many local legends.
Admission: free
Adress: Rua Antonio Borges - Ponta Delgada

Jardins de Sant'Ana: to enter this small garden your identity card is required, because the palace in the park houses the president of the Azorean Government.
Garden consists of trees, flower beds and a pond. Worth seeing besides the palace are the palm avenue, a gigantic Pohutukawa tree and the trees around the pond.

Admission: €2 per person
Inclusions: a map of the garden with a suggested walking tour.
Address: Ladeira de Santana - Ponta Delgada

Azores University garden: small garden included in campus of the Azores university since its foundation, in 1976. It was formerly the private park of 19th century palace which nowadays houses the rectorate. Identification might be requested by the gate keepers, since it's a private terrain.

Book your Private tour, and you can explore some of the amazing stories and tunnels this garden has to offer. 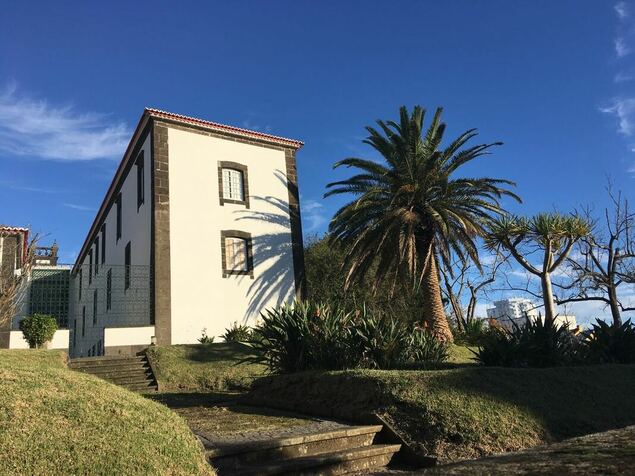 With headquarters in the former St. Andrew convent (16th-century), the Carlos Machado museum was created in 1930 and consists of three sites: the convent building, the Santa Bárbara location (with more modern exhibits) and sacred art museum. They're all in walking distance from each other. The collection ranges from zoology and geology to history, religion and art, toys, etc.

Book your Private tour of the museum and its highlights. 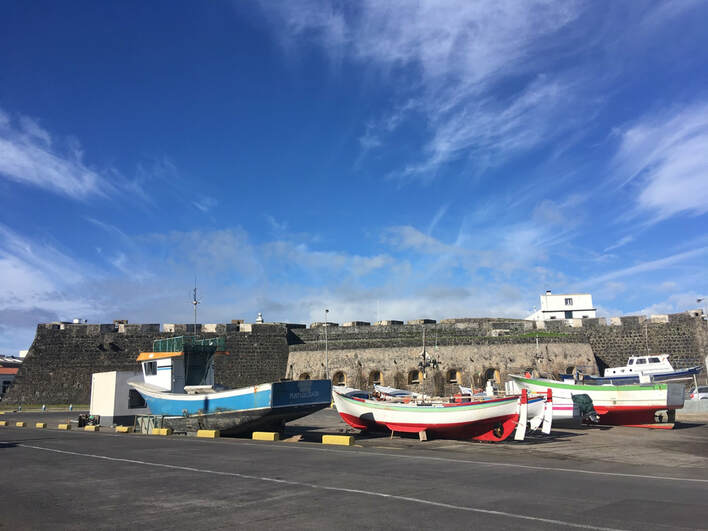 The fort was built in the XVI century to protect the city from pirates and corsairs, and it's the most relevant military building on São Miguel island. It had an important role in several battles opposing Spanish, French and British troops, and nowadays hosts the Military Museum of the Azores.
If offers great views over the harbour and the city.
​
Interesting facts:
About the museum:
Admission: Adults: €3, Child: €2 for under 14 year old
Schedule: weekdays from 10am to 6pm, Saturdays and Sundays from 10am - 1.30pm, 2.30pm to 5pm
Address: R. Eng. Abel Ferin Coutinho 10 - Ponta Delgada
Phone: +351 296 304 920
Estimated visit duration: 1.5h - 2h

​​Book your Private tour,  and learn about war-related episodes in the Azores.

8. Enjoy a panoramic city view: the Hermitage of the Mother of God

The "mother of God" hilltop has been used for military purposes since the XV century, with the construction of a fort embedded in the ground. On top of the hill  there was a chapel from the 1800's which was demolished during WWI, and the current chapel dates from 1924 and is built in neo-gothic style. The place offers and amazing panoramic view of Ponta Delgada!

Ponta Delgada has many street art works, mostly resulting from a yearly art festival called Walk and Talk. 2019's editions will take place from 5 to 20 July, in several Azorean islands. About 40 works are displayed downtown in Ponta Delgada, namely graffiti, carvings, etc., and here's a couple our favourites: 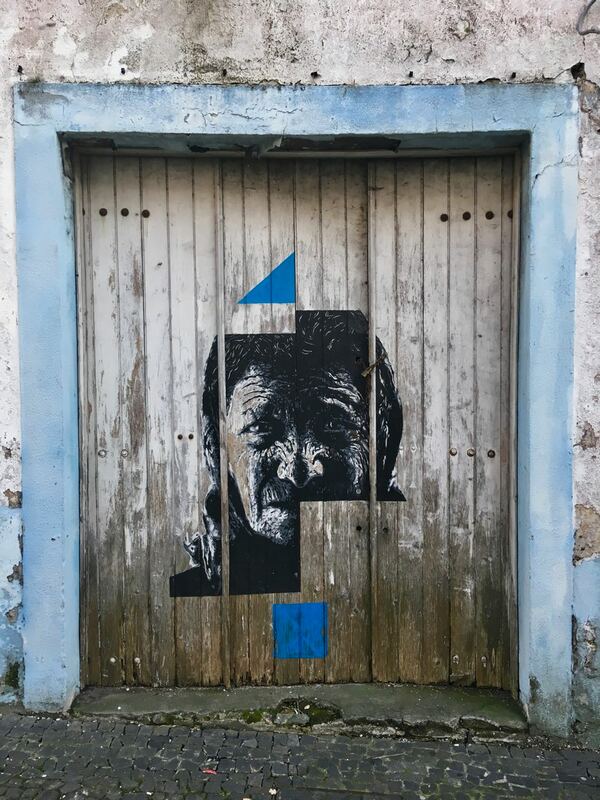 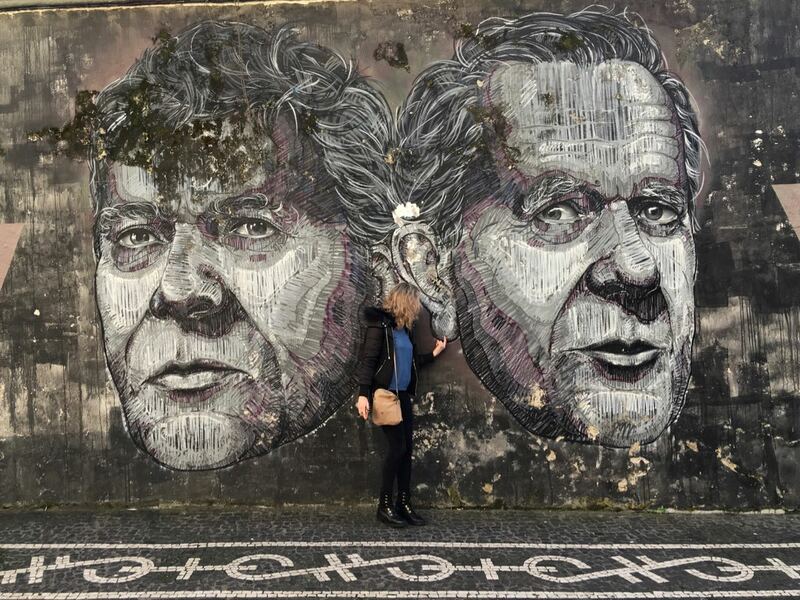 10. Take a swim at Pesqueiro 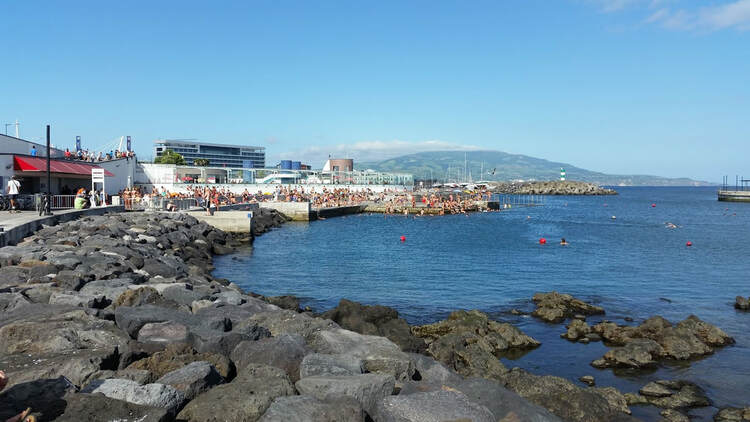 Source
Pesqueiro is the nickname for Ponta Delgada's public swimming area, located on the main avenue, near Portas do Mar. It's a must for locals and many of them bathe all year round, as the water temperature rarely goes below 18ºC. Pesqueiro is an inexpensive and practical way to enjoy a dive into the Atlantic ocean without leaving the city.
Good to know:
Admission: €1
Address: 771, EN1-1A - Ponta Delgada (main avenue)

In the 1590's Ponta Delgada welcomed Jesuit priests who implemented a collegium / school to teach Latin and other subjects. Located just 0.5Km away from the Portas da Cidade, the area is generally called "colégio", and includes:
This location offers many things to do (in both sunny or rainy days!), and there's definitely many interesting facts surrounding it:
​Our ​Ponta Delgada Highlights Tour explores this area. 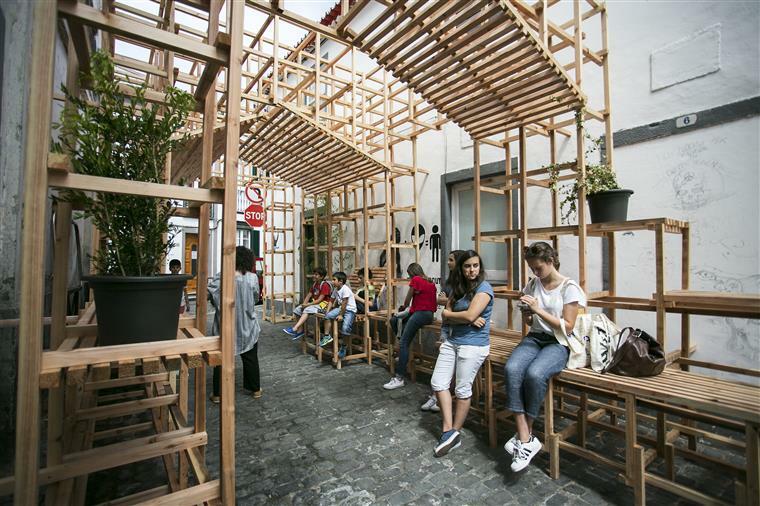 Gruta do Carvão (literally "coal cave) is located on the western side of Ponta Delgada (about 2,5km from downtown), which is mostly built on the top of lava tunnels - a result of the superficial cooling of lava flows.
Admission: Adult €5; Discount:€3; Child €1. Private tours: €20
Inclusion: tour guide
Tour schedule: 10h30, 11h30, 14h30, 15h30, 16h30
Address: Rua do Paim - 2ª Circular - Ponta Delgada
Additional info: make sure you bring comfortable walking shoes (no heels!) and warm clothing, as temperature inside the cave is about 15ºC. Photographs allowed.
Website: http://grutadocarvao.amigosdosacores.pt
Book Now!